Lung cancer, also known as lung carcinoma, is a malignant lung tumor characterized by uncontrolled cell growth in tissues of the lung. This growth can spread beyond the lung by the process of metastasis into nearby tissue or other parts of the body.

Cancer of the lung, like all cancers, results from an abnormality in the body’s basic unit of life, the cell. Normally, the body maintains a system of checks and balances on cell growth so that cells divide to produce new cells only when new cells are needed. 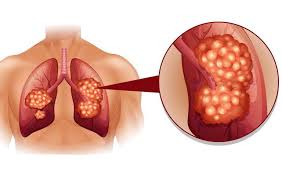 Disruption of this system of checks and balances on cell growth results in an uncontrolled division and proliferation of cells that eventually forms a mass known as a tumor.

Cancer stages tell how far cancer has spread and helped guide treatment. The chance of successful or curative treatment is much higher when lung cancer is diagnosed and treated in the early stages before it spreads. Because lung cancer doesn’t cause obvious symptoms in the earlier stages, diagnosis often comes after it has spread.

Stage 1: Cancer is found in the lung, but it has not spread outside the lung.

Stage 2: Cancer is found in the lung and nearby lymph nodes.

Stage 3: Cancer is in the lung and lymph nodes in the middle of the chest.

Stage 3A: Cancer is found in lymph nodes, but only on the same side of the chest where cancer first started growing.

Stage 4: Cancer has spread to both lungs, into the area around the lungs, or to distant organs.

Small-cell lung cancer (SCLC) has two main stages. In the limited stage, cancer is found in only one lung or nearby lymph nodes on the same side of the chest. The extensive stage means cancer has spread: